Almost 40 percent of employees will work remotely within 10 years, according to a recent survey by Upwork. Eighty-six percent of respondents said that escaping the confines of the office increases productivity by eliminating distractions and impromptu meetings.

At the same time, 87 percent of remote workers said they feel more connected to their colleagues thanks to collaboration tools.

Email remains the primary communication platform in many organizations, but other types of collaboration tools are becoming more common. An online survey conducted by Microsoft and YouGov in January and February 2018 found that Gen Z prefers to collaborate by text and chat. However, collaboration isn’t about any one technology — it’s about creating an environment that encourages the sharing of information. Mackenzie Global Institute has estimated that enhanced communication and collaboration can increase productivity by up to 25 percent.

Microsoft is helping organizations tap the power of collaboration with Microsoft Teams, a platform that brings together conversations, content and applications in a unified experience. Microsoft describes Teams as “a new chat-based workspace that further enhances the collaboration capabilities in Microsoft Office 365.” The goal is to empower users “to be more productive as individuals and in groups.”

There are four core features and capabilities for Microsoft teams. The first is a persistent, threaded chat feature that’s visible by default. This feature is designed to keep the entire team engaged and informed while offering private chat when communication with the group isn’t necessary or desired. Emojis, custom stickers and memes add personality to collaboration.

The second core feature is that Teams serves as a hub for teamwork. Files can be shared, voice and video meetings can be launched, and documents can be collaboratively edited through Teams. Users also can seamlessly shift between business applications. Software integrations will allow users to include information in their conversations directly from third-party apps. Developers can also build their own integrations.

Because different groups have different needs, the Teams interface is highly customizable. Create channels, organize conversations by topic, and use the Tabs feature to make frequently used files and applications easily accessible.

Integration with Office 365 is key to adoption and acceptance of Teams and a primary advantage Microsoft has over other tools. Because Teams’ collaboration capabilities are integrated with Office productivity apps such as Word, Excel, PowerPoint and SharePoint, as well as Microsoft-owned Skype, users don’t have to sign up for a separate service. Teams is included in Office 365 Business Premium and can be added to Office 365 Business subscriptions for an additional fee.

While many new communication and collaboration tools have been dubbed “email killers” over the years, Microsoft has no plans to kill Outlook. Integration with Outlook enables email conversations to be continued in Teams.

Although Microsoft Teams was initially introduced in November 2016, it didn’t become generally available until March 2017. As a result, a December 2016 Spiceworks survey found that just 3 percent of organizations had adopted it.

However, Teams is expected to be a fast riser. In fact, Spiceworks expects it to overtake Slack and Google Hangouts among workplace messaging platforms by the end of 2018. Organizations would be well served to begin testing Teams to see how it can improve collaboration. 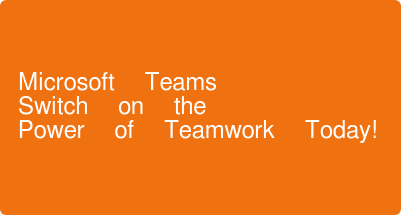